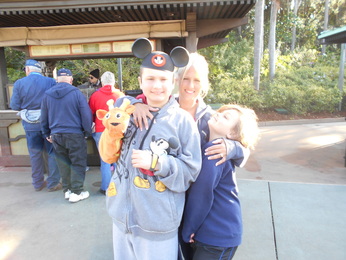 Executive Board of Directors and Advisors

Alonna received her B.S. in Broadcast Journalism and Speech Communication in 1995.  She went on to get her M.S. in Education in 1997.  Married to David in 2000, they welcomed their first son, Jack in 2001.  When Jack was diagnosed with Autism at age two, Alonna resigned from her teaching position and became a full-time advocate for her son.  She immersed herself in Jack's therapies, and worked alongside specialists to ensure effectiveness of therapies and strategies.  In 2005, David and Alonna were blessed with another little boy, Carter.  Since 2008, Alonna has been Co-President of her local school district's Special Education PTA (SEPTA) and is an instructor with The Long Island Institute of Professional Studies, teaching "Assisting Students With Autism in the Classroom". Alonna has been a guest lecturer for Tuoro College, "Identifying and developing Programs for Gifted Students with Learning Disabilities", as well as given presentations for Superintendent's Conference days for various school districts on Special Education and Autism.  Alonna is the founder of Families In Arms, Inc., along with her father Ric.

Ric started singing at the age of three.  When he was nine years old, he was entered into a local talent show for underprivileged children.  He won first prize, and with help from Coach Telly Savalas, he later performed at Carnage Hall.  In the early 60's,  Ric created the group "Ricky and the VaCels", with their first hit being "Lorraine", a song Ric wrote about his girlfriend, who is now his wife for over 48 years.  In 1962, Ric joined "Jay and the Americans", one of the biggest groups of that time.  Ric and his wife had two daughters in 1972 and 1973. In 1980, he opened a successful music company, "Ric Mango Orchestras", a Long Island group that did weddings, dinner dances, large corporate functions, etc.  Over a long career, Ric has supported and helped raise money for Cooleys Anemia, Juvenile Diabetes, Breast Cancer, Down Syndrome, Muscular Dystrophy and Autism.   In June, 2012, Ric retired.  His last performance was with his group at Westbury Music Fair.  He now enjoys retirement with his wife, daughters,  son-in-laws, and four grandchildren, one (Jack) that was diagnosed with Autism at age two.  Ric is the Co-founder of Families In Arms, Inc., with his daughter Alonna.

Allan A. Lippolis, Executive Board Member

In 1972, at the age of 25, Allan and three friends founded Superior Washer and Gasket Corporation, turning a young friendship into a success story.  They began in a 3,600 square foot rented building in Babylon, New York.  Presently, they have expanded into a 49,000 square foot building in Hauppauge, New York, as well as a 41,000 square foot building in Rock Hill, South Carolina. Together they built one of the largest stocking manufacturers of specialty washers and stampings in the United States.  Allan is the President and CEO of Superior Washer and Gasket Corporation.  He has Board of Directors affiliations with the Huntington Crescent Club as well as being a HIA-LI (Hauppauge Industrial Association) lifetime board member. Allan received an AAS in 1967 from SUNY Farmingdale, and attended Tool and Die Making School from 1967-1971.  He enjoys golf and time with family and friends.

Born in Blackburn Lancashire in the UK, Stephen studied electrical engineering at Mid Hertfordshire College, and finished his studies at Blackburn College of Technology and Design. He worked at a number of manufacturing companies as an electrical engineer, eventually taking on sales with an industrial drives company selling AC and DC drive systems.  Stephen began his first distribution company in 1997 in Connecticut.  In 2003, his second distribution and service company began, manufacturing helical planetary gear boxes.  As founder and president, he has seen impressive growth.  Stephen is also very involved in the field of the Human Microbiomes (sometimes known as the second genome).  He supports the study of science relating to many human conditions that are prevalent today.  He has seen promising studies linking the Human Microbiome to positive therapies for many conditions, including MRSA, Cancer, Alzheimers and Autism (just to name a few).  Stephen enjoys spending his free time with his children and grandchildren.


"The very things that held you down are gonna carry you up and up and up." - Timothy Mouse, Dumbo